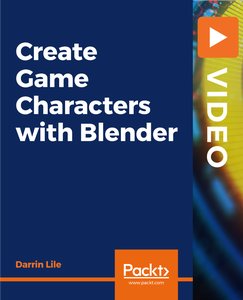 Use Blender to 3D model, texture, rig, and animate your own game character
Model and sculpt a game character in Blender
Use Blender's retopology tools
Create UV maps and bake texture maps
Use Blender's texturing painting tools
Rig a character with Blender's Rigify add-on
Animate game cycles for a game character
Import a Blender character into Unity
Set-up a character controller in Unity to move your character around
Learn how to create your own game characters in Blender 3D! Learn how to model, texture, rig, and animate a character in Blender 3D. Discover how to bring the character into Unity and set-up a character controller to move the character around.
Blender provides an excellent low-cost way to learn the fundamentals of 3D modeling, texturing, and rendering. We will then use the Blender retopology tools, the Grease Pencil and the BSurfaces tools, to create a low-resolution version of our high-resolution sculpt. And we will bake normal and ambient occlusion maps in Blender, from the hi-res sculpt to the low-poly mesh. We will then import these texture maps into Unity and test them on our character in-game. We will look at some of the unique issues regarding UV mapping a character in Blender. We will use the UV mapping tools in Blender to create an organized UV map that can be exported to external paint programs like Photoshop or GIMP for texturing. And we will look at the texture painting tools in Blender and how to use them to create texture maps for the character. Then we will use the Blender Rigify add-on to create a basic rig for our game character. You'll learn how to prep the character for rigging and generate the base rig. We will then generate the control objects of the rig and go over the various controls and how they can be used during animation. From there we will adjust the weights of the character in Blender using vertex groups, and parent the character's war hammer and shield to the rig. You'll then learn the basics of creating animation cycles for a game character in Blender. We'll use Blender's graph editor and dope sheet to animate the idle and run animations, as well as create a jump pose. Finally, we will take it all into Unity and write some code to get our character running and jumping through a test level. All the code and supporting files for this course are available at - github.com/PacktPublishing/Create-Game-Characters-with-Blender
You should be able to easily navigate the Blender interface and have some experience with Blender's modeling tools.
A pen tablet is used for digital painting during the texturing section of the course. The instructor uses a Wacom Intuos tablet.
DOWNLOAD
uploadgig